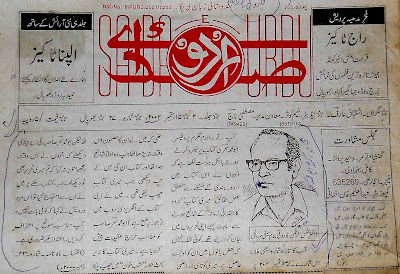 Shamsur Rahman Faruqi may be a big name in Urdu criticism but a new book has exposed him over the matters lifted by him to write his books and articles. It is alleged  Shamsur Rahman Faruqi has been lifting material from various articles and books and then presenting them in somewhat new shape to own credit of the original idea. The most glaring example, is lifting of matter from the famous book of Dr Abu Mohammad Sahar titled “Urdu Imla Aur Uski Islaah’.The plagiarism came to light when Shamsur Rehman Faruqui’s book “Urdu Ka Ibtidai Zamana” was published. Soon after, literary persons of Bhopal raised a hue and cry over the matter. Some people even wanted to sue Shamsur Rehman Faruqui for copyright infringement but Dr Abu Mohammad Sahar, who was a saintly person, prevented them doing so. Interestingly, Shamsur Rehman Farqui had admitted that his book “Urdu Ka Ibtidai Zamana”  is akin to the book of Dr Abu Mohammad Sahar. He had made this admission in the year 2003 in a letter to Dr Saifi Sironji, the editor of trimonthly Intesab, published from Sirong. This letter has been published in Sada-e-Urdu, Bhopal, edited by short story writer Naeem Kausar. In the letter, Faruqui had written that he did not know that a similar book by Dr. Abu Mohammad Sahar was in existence and he came to know of it only after publication of his (Faruqui’s) book. He said that he would make a mention of it in the book being published in E0nglish (Which he later did, though under pressure after being exposed). Here is the transliteration of the letter by Faruqui, admitting his plagiarism, which throws light on plagiarism-like activities of Faruqui, who has been unfortunately bestowed with top Urdu literary awards in India, Pakistan and abroad. Due to his manipulations and manoevring Faruqui has established himself as a ‘great’ writer and critic. But in the process he has stooped too low. This is despite that fact he Faruqui was most vocal against Gopichand Narnag, whom he had alleged of plagiarism.